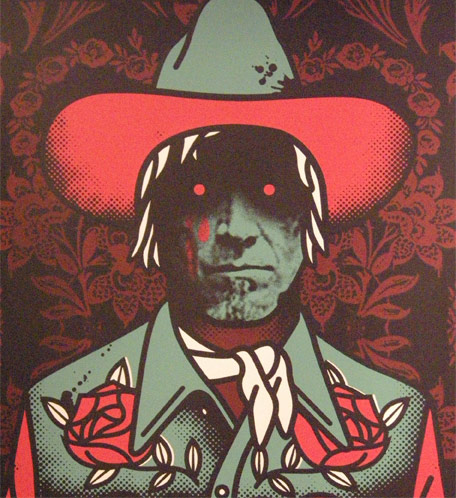 Mark Lanegan has many opposites.

Will you walk with me underground
And forgive all my sicknesses and my sorrows?

The Autry at Griffith Park was a strange place to see Mark Lanegan, the prince of dark, gloomy, somber yet groovy, gritty, hypnotic, hyper-masculine rock. The Autry specializes in western American history – Cowboys and Indians. It was my first time there, but it seems to be a very bright and positive place. The concert was in a courtyard, in the most pleasant of spring evening weather. In the cafe where I got a hamburger and beer before the show, the woman at the register called everybody mami and papi. The crowd of a couple hundred mostly wore black (for instance, my pants), but not the goth type, more the arty type – there were plenty of blazers over t-shirts. There was very little attitude in the crowd – it was relaxed and civilized. In fact, the concert was sponsored by KCRW — an NPR affiliate from Santa Monica College, but more importantly, the home of Morning Becomes Eclectic, a real taste leader in hip music circles. And unlike some concerts, there were plenty of women!

Come to me
burn your starry crown
my dark angel

So, bring on the music that seems inspired by highs of drugs and sex but dominated by the lows. Music from bars, shabby apartments and gutters (he was even in a collaboration called The Gutter Twins), but different bars, shabby apartments and gutters than Tom Waits – he has none of that hopeful romanticism (and musical nostalgia), he seems more familiar and comfortable with despair and addiction.

Showmanship was spurned, and properly so for this music. There was no jumping, spinning or arm thrusting. I didn’t see Roger Waters perform The Wall 3 nights before, but this was assuredly its opposite. It really seems to be indoor music. Onstage, the band were bathed in red light provided in part by 3 lamps that you would find in a neglected living room – trying to bring a little claustrophobic dinginess to this airy courtyard on a fine spring eve. Perhaps it was fitting that his vocals should have been a little higher in the mix.

From my fingertips, the cigarette throws ashes to the ground
I’d stop and talk to the girls who work this street, but I got business farther down

Mr. Lanegan was going to come out after the show to sign things. Yet another way in which this brooding music was presented in such a civilized setting. Even though I had bought the poster for the show, I wasn’t in the mood, so I took off and enjoyed (not-even-all-that-) late night driving on the empty freeways through Los Angeles. But now I’m curious as to how he carried himself. Was he bright and cheery? Or just polite enough?

Stared down the past and just scarred my eyes

In the car I had been listening to another favorite of Morning Becomes Eclectic, Brendan Benson. He’s rather the opposite of Mark Lanegan – poppy and somewhat feminine (his album My Old, Familiar Friend is great). After the show, I popped that out and grabbed at random another disc. It was King Crimson – a completely different type of opposite – aggressively musical – I enjoyed a good Thrak-ing. But their concerts had an absolute dearth of women, and more guys in t-shirts without the blazers. I think even MBE would look the other way, I guess eclectic has to be hip, as well.

Some jack of diamonds kicked her heart around
Did they know they were walking on holy ground?

Here, chew on some Bubblegum: